Wade Smith Liverpool, holds claims to have been one of the most influential shops on the football casual scene.

Strolling down Slater Street in Liverpool at the corner of Fleet Street, the unit now occupied by Hardman Pizza will be of little significance to many. Turn the corner onto Fleet Street, there is a fitting reminder to past glories, a shop front sized Wade Smith mural by Liverpool street artist Paul Curtis which stands as a celebration to former glories.

In collaboration with trainer and clothing retailer Transalpino, Curtis, a renowned Liverpool artist specialising in street art and murals commemorated the original store with the Wade Smith mural painted on the wall to the right of the original shop. 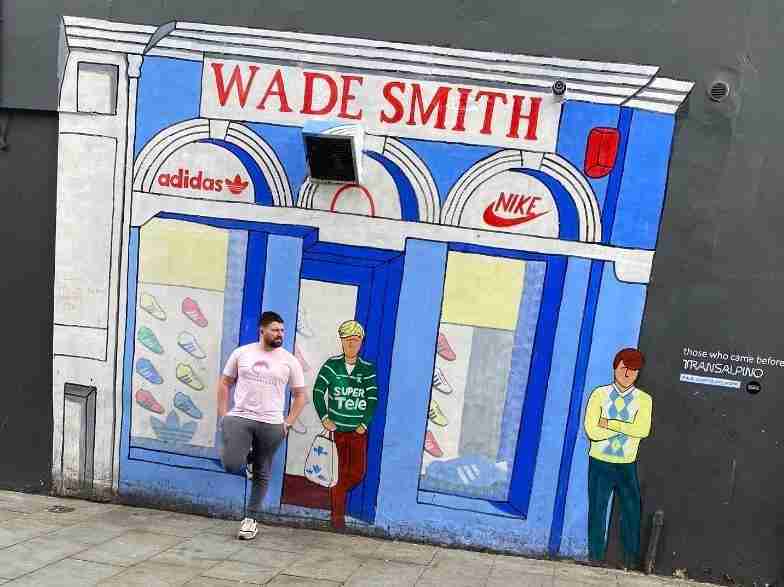 The mural has become a shrine for casuals and trainer fans alike. No trip to Liverpool is complete without the photo opportunity to be snapped standing in the mural.

Founded in 1982 by entrepreneur and businessman Robert Wade Smith, started life as a one-man business marketing itself as a ‘Sports Shoe Shop’. Over the next 20 years, they had huge success and growth, at its peak employing over 300 staff.

Starting out, the store specialised in rare and expensive trainers. No surprise to any football casual aficionado but Adidas were his best sellers and Wade Smith was key in cementing Adidas as the footwear of choice for the terrace casuals.

Inspired by Liverpool FC’s European forays in the 1980s, Wade Smith with his retail experience saw an opportunity to source rare and expensive trainers from Europe and bring them to the burgeoning UK market. He not only did he find traction in the North West but also with trainer fans from around the UK who travelled the country to snap up the latest offerings

The popularity of Muchens, Forest Hills and Stan Smiths grew in a big part influenced by the trends set by Wade Smith. Through the 1980s, they reportedly sold over 110,000 Adidas Trimm Trab! Nearly 40 years later, Trimm Trabs remain a trainer favourite of the football casual subculture.

Following the initial success with the opening of their flagship store on Matthew Street in the heart of Liverpool’s Cavern Quarter.

The product lines expanded into designer clothing as well as the much sought after trainers, it remained the go-to shop outside of London for the football casual. The Matthew Street store covered 5 floors and famously incorporated an indoor climbing wall.

In 1998, Arcadia Group who held in their portfolio more mainstream brands including Topshop & Miss Selfridge purchased Wade Smith for £17.3 million. For devotees, there was always a doubt whether the brand could prosper under their new corporate umbrella? It was therefore met with all-round approval from the enthusiasts that had propelled the brand in its earlier success when Robert Wade Smith bought back the firm from Arcadia in 2001 for £7m.

The triumphant return proved relatively short-lived, the firm ceased operating and closed its doors for the final time in 2005.

While long gone, the legacy remains. Evidence can be seen on the terraces around the country every Saturday afternoon. Wade Smith was the store that introduced rare and sought after trainers to many a football casual.