When you are twenty-nine years old and meant to be a grown-up it’s probably fair to think your chances of pulling on your club shirt and scoring a penalty at Wembley are slim. If you are a fat piss can who supports York City, the chances are almost nil.

Having been hooked since I was taken in 1976 as a seven-year-old I’ve witnessed the pain of seeking re-election to the football league, some woeful footballers, some even more woeful performances but, some rare moments of joy along the way.

1983/84 saw York City become champions of division four and become the first team to reach 100 points as Denis Smith led John Byrne, Keith Walwyn and the team on a glorious romp to victory almost every week.

There followed a victory over Arsenal and draws with Liverpool in the FA Cup before Denis left and we became shit again. 1993/94 saw us promoted via a playoff final victory at Wembley when a balding ginger bloke called Wayne Hall scored the penalty shoot out winner against Crewe.

There were some great nights including that mental 3-0 win at Old Trafford in 94/95 when Beckham and co were humbled.

Essentially, it’s the days and night out with your mates that are more important than the result when supporting York City or any club.

The not so glory years

During 1998/99 the way the fixtures came out I’d clocked up 15 or 16 games on the bounce so decided to do every game of the season home and away. It was another mostly shit season but with rare moments of joy …… Fulham away always a joy as are most London trips.

The season ended with a 4-0 defeat at Man City and we were relegated after dropping into the relegation zone just twenty minutes before the season ended. We’d beaten City 2-1 at home before Christmas when apparently every Man City fan ever attended despite the crowd being less than 8000….. Noel Gallagher did show up though.

“At the interview, I was asked ‘why do I want to be a football mascot?”

Didn’t have a clue what to say but said I’d been a massive fan of Its A Knockout and thought, given the clubs results, they could do with an injection of some humour.”

During those long hours on the road, we talked some drunk shit and after seeing a bloke dressed as a dog ( Royal the mascot ) at Reading be the most entertaining thing that night during another defeat, we agreed our club’s fortunes would improve if one of us became the mascot.

One or two of our group were writing to York City applying to be the manager just because they were pretty good at Football Manager on Playstation. We thought it better to be writing to the manager Alan Little about adding to his squad!!

A letter was sent to Mr Little, no response. Rude but on a losing run so acceptable?

A second letter prompted a response via the commercial manager and an interview for a possible new signing was agreed. Not having thought this would happen a view of the lads was it should be followed through and I was chosen.

What to wear to a football mascot interview

It was all a bit weird really as no idea what to wear …. suit too formal, jeans trainers polo, bit football casual and I even considered going to a fancy dress shop for a costume.

At the interview, I was asked ‘why do I want to be a football mascot?” Didn’t have a clue what to say but said I’d been a massive fan of Its A Knockout and thought, given the clubs results, they could do with an injection of humour.

The interview went well and at the end, the commercial manager Maureen shook my hand and said the job was mine …….. shit!

This had been a bit of a piss-take and then a game of bluff but there I was about to become Yorkie the Lion the following season. 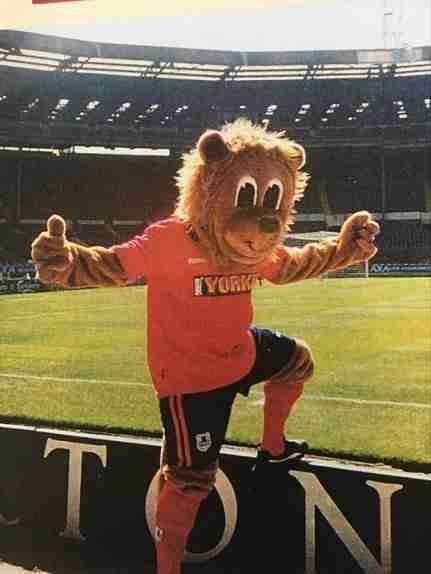 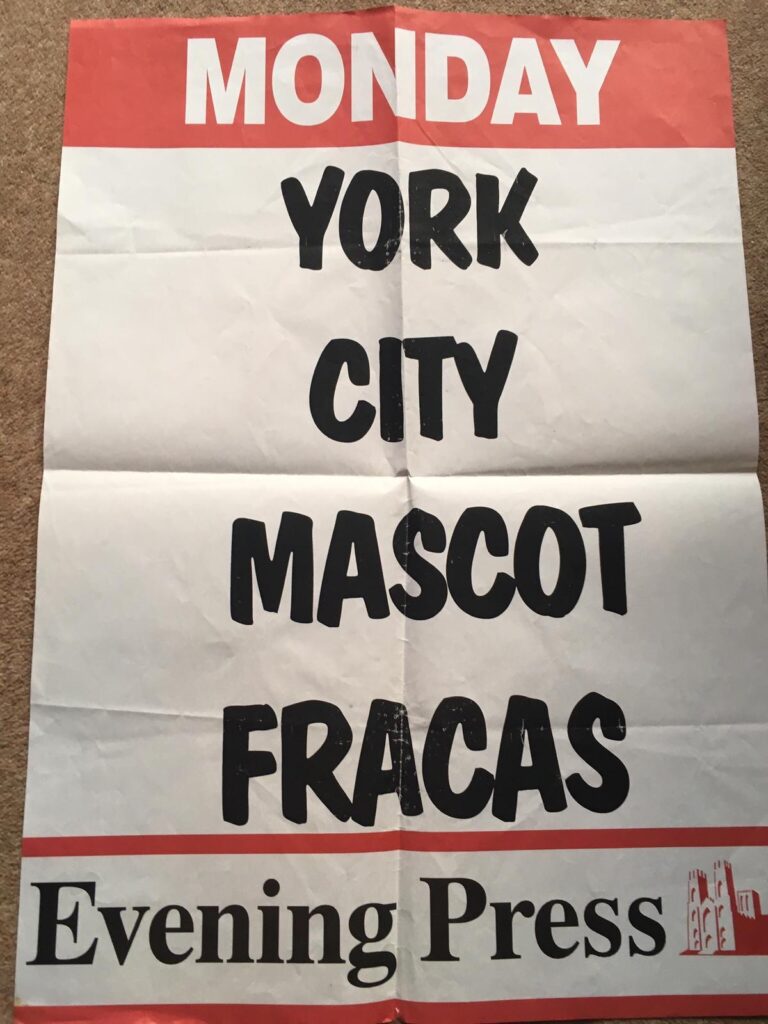 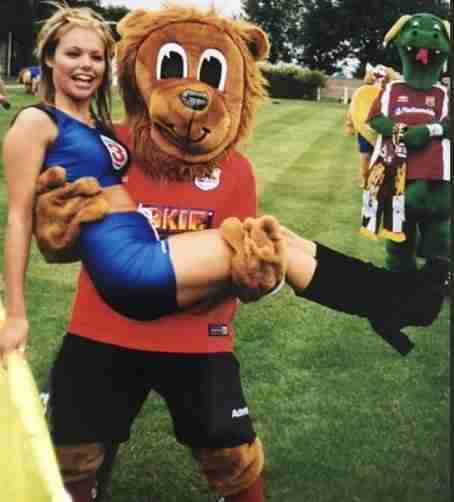 My first season as Yorkie The Lion

1999/2000 although starting in division four and finishing near the bottom was actually a proper laugh as opportunities for banter with players and fans were available often and nobody was that bothered how shit the football was.

The highlight was an invitation via The FA and Axa who were sponsoring the FA Cup, to travel to Wembley to film some tv adverts.

I’d be paid but would have to get a day of work …… no problem.

Arriving at Wembley I changed into the football mascot costume behind The Royal Box.

Down the famous steps and onto the pitch to take a penalty at the tunnel end versus another middle-aged bloke dressed as an animal …… it was Roary from Hull City ……. smashed the ball home (well, in off the post) and celebrated in the dentist chair pose. Then over to the steps, up them and lift The FA Cup …….. result.

All a bit weird but truly an amazing experience.

I’d long since hung my paws up when York City returned to the new Wembley in 2012 to win twice in 8 days.

Article by Yorkie The Lion