14 Must Have Football Casual Trainers

Since the emergence of the football casual scene in the late 70s, trainers have gathered ever-increasing importance in terrace wear fashion. Here, we’ll give you our 14 ‘must-have’ trainers, all tried and tested by Fritidsklader.

No surprises that the Adidas brand represents a majority of our favourites, but with a smattering of other name brands making the list here is our ultimate guide to terrace footwear.

When it came to Fritidsklader’s number 1 must-have football casual trainer it wasn’t even close, our stand out number 1 trainer is the Adidas Trimm Trab.

The Trimm Trab was first released by Adidas in Germany in the late 70s originally in an initiative with the German Government to promote fitness within the German population.

By the time Blur had endorsed Trimm Trabs in their 1999 recording, Trimm Trabs had become an iconic item for the football casuals in the UK, initially in the North West of England.

The casual trainer scene boomed in the North West after Wade Smith, an independent Liverpool retailer started importing Trimm Trabs and other rare Adidas trainers into the UK from Germany. They initially found popularity with Merseyside casuals in the 1980s before this demand spread to football fans all around the UK. To this day, long after Wade Smith closed its doors in 2005, the Trimm Trab is as popular as ever with the fashion-conscious football casual.

Number 2 in our list of must-have football casual trainers is the Adidas Munchen. Not the recent iterations but the classic white-soled design.

Originally launched in 1976, the Adidas Munchen, taking its name from the German city of Munich, is our favourite in the City theme series of Adidas trainers.

Recent releases have featured the gum coloured sole and come with a beer and vomit resistant guarantee intended for those who attend Munich’s famous Oktoberfest. Features which could prove useful in the football casual world but we much prefer the original with its classic chunky white sole, low profile silhouette and Adidas 3 stripes. 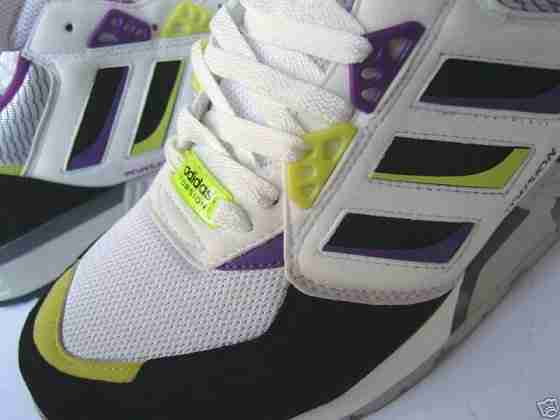 Designed as a running shoe, the Adidas Torsion can divide views with its chunky look, split midsole and reflective colours, but Fritidklader loves it and it comes in 3rd in our must-have trainer’s list.

The Torsion very much has an 80’s look and vibe, built for comfort and speed with its unique X shaped solebar and responsive cushioning it is one of the most comfortable terrace trainers around.

One of the most famous and widely worn Adidas trainers is the Adidas Gazelle.

First released in the 1960s, early designs were in red and blue, red being originally meant for Handball and the blue design as a training shoe. 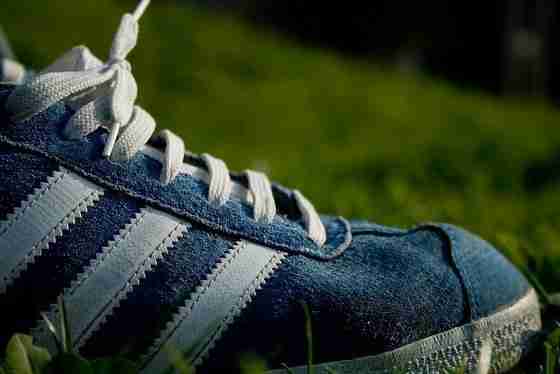 “My Shoe” flickr photo by Francesco Zaia https://flickr.com/photos/rohypnol/425632232 shared under a Creative Commons (BY) license

The popularity of the Adidas Gazelle soared in the 90s when it became the trainer of choice for the Britpop generation. Gazelles were firm favourites with Oasis and reached a new audience when Supermodel Helena Christensen famously appeared on the March 1994 cover of Elle magazine naked bar a pair of Gazelles.

While Puma failed to reach the level of appeal with the football casual scene of that of Adolf Dassler with Adidas, they still made some classic football casual trainers.

The Adidas SL72 was first produced in 1972 and was the first Adidas shoe to support the trefoil image. Trefoil comes from the Latin word Trifolium, meaning 3 leafed plant. From this first use, the Adidas trefoil became synonymous with the brand.

A classic running shoe shape with narrowed toe, all SL72’s are identifiable by the different coloured midsole EVA (ethylene vinyl acetate) strip, which as well as giving the SL72 a definitive look is designed to provide added comfort and support.

A classic football casual trainer whose popularity has been enhanced over the years with releases in multiple colour combinations.

As you’d guess from the name, the Squash was designed for use on the court and on its release in 1974 it was the first squash shoe produced by Hi-Tec.

Over 49 years later and Hi-Tec say they have sold more than 19 million.

For those of a certain generation, it’s the trainer your dad used to wear, a 70’s retro classic that has evolved from the squash court to the football terraces.

A simple yet classic look. Suede, leather and mesh uppers in all white finished with colour splashes in green and a gum coloured sole with inbuilt midsole EVA cushioning make this a comfortable and a timelessly good looking football casual trainer.

At number 7 in the Fritidsklader football casual trainers list, it’s a must-have for any terrace dweller. 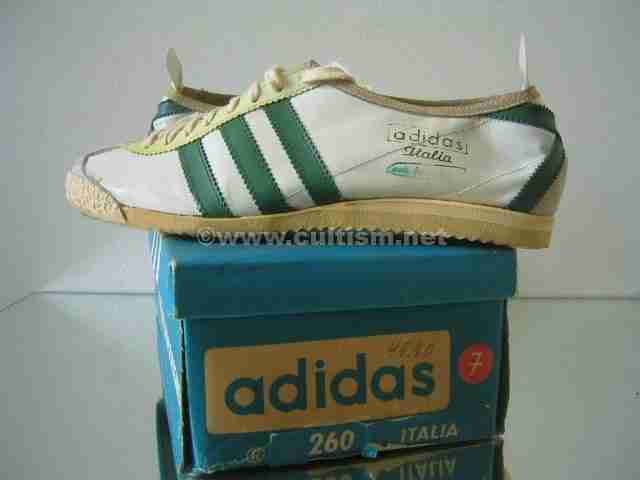 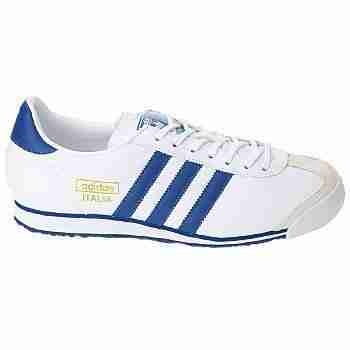 When it comes to Adidas retro trainers the 1960 vintage Adidas Italia really is a thing of beauty.

Adidas absolutely captured the flavour of coolness and design that you’d associate with Italy in the 1960s. The distinctive front bumper and the leather tongue on the heel of the Italia make it one of the best looking trainers ever produced.

The Italia was launched to celebrate the 1960 Olympic Games in Rome. A reissue in 2010 captured the style and the essence of the original Italia but there’s something about the patina of a well-worn leather that gives this trainer its classic looks.

In our opinion, the Adidas Italia improves with age and from years of wear and tear of standing out on the terraces.

A 2020 reissue from the classic Adidas City Series, the Amsterdam is the newest trainer in the Fritidsklader must-have classic terrace wear list.

Chocolate and caramel might not sound the most inspiring colour match for a trainer, but with the Amsterdam, it works. A suede upper and gum coloured sole sees this retro reissue hit our top 10 of football casual trainers.

Indie idol and ex Stone Roses frontman Ian Brown teaming up with Adidas were always going to be a big winner in the football casual trainers scene.

Released in 2011, this limited edition classic trainer in black leather and mesh, endorsed with a gold image of Brown on the tongue and his name in gold on the side is towards the top of the tree when it comes to must-have football terrace trainers.

In Fritidskladers wardrobe, the Adidas ZX is a big match choice and number 10 in our must-have football casual trainers list. 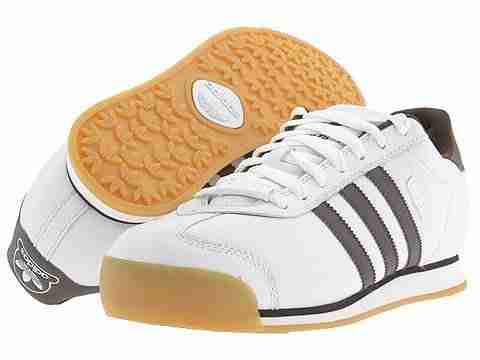 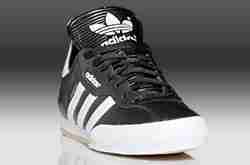 A terrace fashion classic and the go-to trainer for many a football casual.

The Adidas Samba trainer is over 70 years old, first produced in 1949 in the classic black with the trademark 3 white stripes. It’s one of the most sought after trainers and reputed to be the 2nd most popular shoe made by Adidas behind the Stan Smith.

The original black and white design have transitioned into many colours, though throughout the tan coloured sole has remained making it unique and instantly recognisable.

A classic and stylish shoe available in a wide range of colours.

Taking its inspiration from the SL72 the 2014 release of the Adidas SL Loop Runner makes it one of the newest trainers on our ‘must-have’ list.

Much like its esteemed older relative, the SL Loop Runner is a lightweight sports shoe of great design. A unique design feature of the Loop Runner is the use of 3 Adidas stripes which extend and detach from the body of the shoe to form eyeholes for the laces.

Like Haillet, American Stan Smith was a tennis pro and winner of the US Open in 1971 and the Wimbledon Champion in 1972.

Unlike most Adidas trainers, the Stan Smith was devoid of the trademark 3 stripes, these were replaced by 3 lines of punched holes.

The design has changed little over the years despite multiple versions and limited editions. The simple white shoe with grass green heel and Stan Smith image on the tongue have remained ever popular over the years and has been adopted by the football casual scene as an all-time favourite. 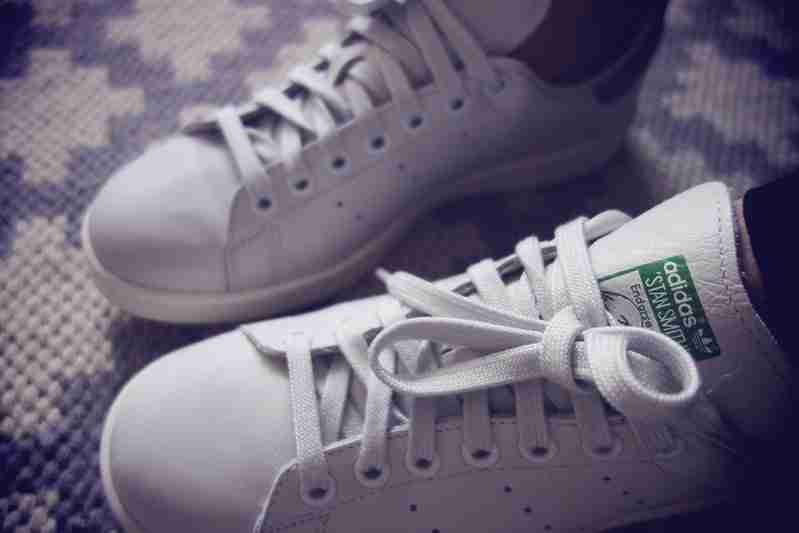 14 Must have football casual trainers

Agree or disagree with us?

Have we missed your favourite? Leave us a comment below.